Ryan McGinness’s paintings incorporate logos, icons, and decorative motifs more commonly associated with commercial design. These graphic elements, which he designs himself, are superimposed in his paintings until individual symbols are absorbed into dense abstract patterns. Multi-layered compositions such as Arab Cadillac Generator become synonymous with the mixed signals of advertising and mass media that surround us in our global consumer culture. The aesthetics of corporate communications have long been a significant influence on McGinness, who grew up in the 1980s, a decade in which brand identity came to define status and community for American youth. His embrace of marketing extends to his entire artistic enterprise, Ryan McGinness Studios, Inc. (RMS) whose slogan is: “RMS communicates personal expressions as universal truths.”

Because I couldn’t really afford cool brands, from an early age I was making my own brands, so to speak, or stenciling and screening my own shirts and decorating my skateboards. Then my peers wanted those things and that was very empowering. And then I recognized that what I was doing was called design.

Other Works by Ryan McGinness 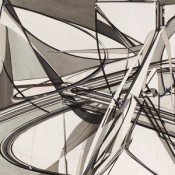 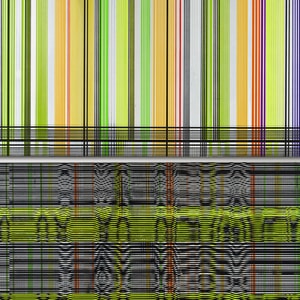 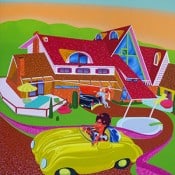