Edward Hopper was born in 1882 in Nyack, New York and received his artistic training in nearby Manhattan, whose cavernous streets became the setting for some of his most memorable works. In his characteristically straightforward depictions Hopper dramatized the anxiety and isolation he sensed within the densely populated urban environs. A similarly pensive quality provides a compelling undercurrent to his rural scenes of the coastal communities in New England where he spent many summers. Even in his most expansive landscapes, Hopper manages to imply psychological tension.

California Hills was painted during a six month residency at the Huntington Hartford Foundation in the Pacific Palisades, one of the artist’s rare excursions westward. In his seemingly effortless watercolor technique Hopper conveys the rugged vitality of the landscape on a blustery afternoon. However, this pastoral scene is hemmed in by architecture at the left margin of the composition–one of the art studios–and a paved roadway entering on the right. These manmade structures serve as subtle reminders of encroaching modernity and provide a poignant contrast to the unspoiled nature beyond.

This painting was commissioned by Hallmark for the invitational Fourth International Hallmark Art Award of 1957. Hopper garnered the First Prize of $2,000 for California Hills, which was deemed by the jurors to be “an example of his unrivaled ability to recognize and capture a significant native landscape and then impart to it a luminous beauty.”

My aim in painting has always been the most exact transcription possible of my most intimate impressions of nature. If this end is unattainable, so, it can be said, is perfection in any other ideal of painting or in any other of man’s activities.

Other Works by Edward Hopper 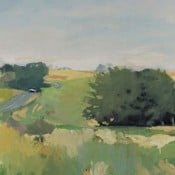 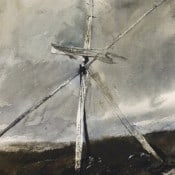 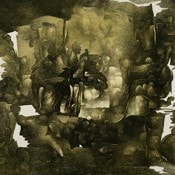