Peter Hurd was born in Roswell, New Mexico in 1904 during a transitional era in the American southwest. As a young man he settled in Chadd’s Ford, Pennsylvania where he studied privately with famed illustrator N.C. Wyeth. There he married the artist Henriette Wyeth, the eldest daughter of his mentor, and raised two children before returning to Roswell for good in the 1936. Back in New Mexico Hurd found inspiration in the subjects he understood best: the desert landscape and the cowboys and ranch hands he had known since childhood. His portraits of indigenous people, such as Don Pablo, are among his most sensitive and heartfelt works. Within the rancher’s weathered features, Hurd could trace the lineage of a storied culture. “These Spanish people,” he wrote, “whose blood lines must include Gothic Spaniard, Moor, and American Indian, have a strong appeal for me. Their legends, their songs, their faces are entangled in my earliest memories.”

Hurd’s portraits are patterned after early Renaissance paintings that depict noble figures positioned in front of distant landscapes, often the region over which they had dominion. Set against the rolling New Mexico hills, this classical pose imbues the humble rancher Don Pablo with strength and dignity. Hurd’s reference to art history is further evidenced in his use of a fifteenth century formula for paint, which combines natural pigment with egg yolk, distilled water, and fig juice. This egg tempera technique, which was later adopted by his young brother-in-law Andrew Wyeth, can also be seen in the precisely rendered work Magic Realists painters, such as Paul Cadmus and Robert Vickrey. However, in his poignant portrayals of the rural Southwest, Hurd’s work stands apart.

The ones I paint: men whose clothing skin and eyes are all conditioned by sun and wind. The ranchers in particular seem to me to develop occupational masks. As the age their faces are abraded by the elements as is the earth. If their world is a limited one, it is one in which they move with knowledge and confidence.

Other Works by Peter Hurd 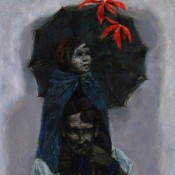 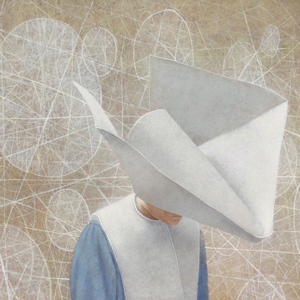 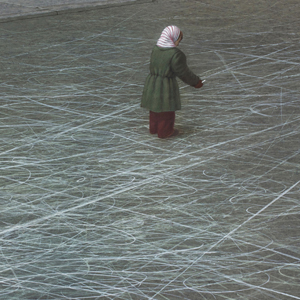