Benjamin Edwards paints a vision of the American landscape defined not by mountains and rivers, but by architecture and advertising.

Produced over a two-year period, Edge is one of his largest paintings to date. It resulted from a road trip he made in 2000 around the perimeter of Los Angeles. Along the way, he photographed 600 industrial and commercial sites that circled the urban border. He then compiled these images into a digital matrix for his final hand-painted image. Ultimately, the many layers seem to obliterate each other into a colorless mist, with only traces of familiar commercial structures and corporate signage discernable at the periphery.

Edwards is one of a new generation of artists who combine computer software and traditional painting techniques to address the convergence of the real and the virtual in the world around us. By collapsing multiple viewpoints into an elusive and fluctuating pictorial space, such work evinces a new “post-digital” perspective that ventures beyond the fixed and orderly depictions of painters in the past.

The initial concept and general visualization for an image always begin for me out of everyday experiences as a consumer, from the subconscious repetition of elements of the mass-cultural landscape which unavoidably, and relentlessly, fall into my perception like droplets into an ocean . . . This new manifestation of previously unrelated and disorganized facts is an attempt to express something about the places we inhabit, the ones we have lost, the places we hoped to make, and the ones we hope to never see.

Other Works by Benjamin Edwards 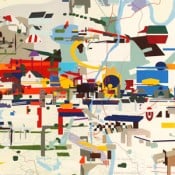 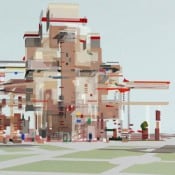 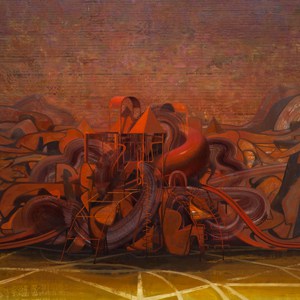