Julia Wachtel weaves disparate images from popular culture into a subversive brand of social commentary. She first gained attention in the 1980s as part of a generation of “appropriation artists” who strategically replicated and subverted mass media imagery. Wachtel’s art is particularly notable for its jarring juxtaposition of low brow illustration and dramatic photojournalism.

This painting from her “Landscape” series features a comical greeting card character, a trademark of her work at that time. In this instance a cartoon of a weary artist is presented against the gritty backdrop of the 1989 Tiananmen Square uprising, a contrast that seems to convey the burden and powerlessness of artists to interpret historical events, especially since the advent of photojournalism. In addition to exhibiting her work independently, Julia Wachtel has also shown art as part of the politically-minded artist’s collaborative Group Material.

In a simple and direct way greeting card images are about expression. First their function is to express something: congratulations, I miss you, I love you and so on. Second their visual form is highly expressive. The cartoon characters I’ve been using, the sort of hapless souls with distorted bodies are a good example. It fascinates me how easily form conveys expression through such simple means.

Other Works by Julia Wachtel 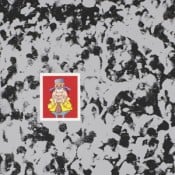 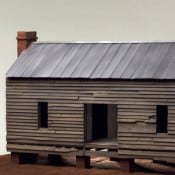