A masterwork by 19th century American genre painter Eastman Johnson is now on loan to the Nelson-Atkins Museum of Art in Kansas City. Painted in 1860, The Freedom Ring is a powerful and enduring document of the abolitionist movement. It will hang for the remainder of the year alongside Johnson’s famed 1859 work Negro Life at the South, which is on extended loan from The New York Historical Society. These two works exemplify Eastman Johnson’s characteristically humanist portrayals of African Americans at a pivotal moment in American history.

The Freedom Ring was commissioned by Reverend Henry Ward Beecher, brother of abolitionist author Harriet Beecher Stowe, to tell the story of a girl nicknamed Little Pinky, who was bought out of slavery by Beecher’s congregation at Plymouth Church in Brooklyn, New York. This moving story was widely reported, becoming an iconic victory for the abolitionist movement. The Freedom Ring was acquired by Hallmark in 1951 and is one of two Eastman Johnson paintings in the collection. 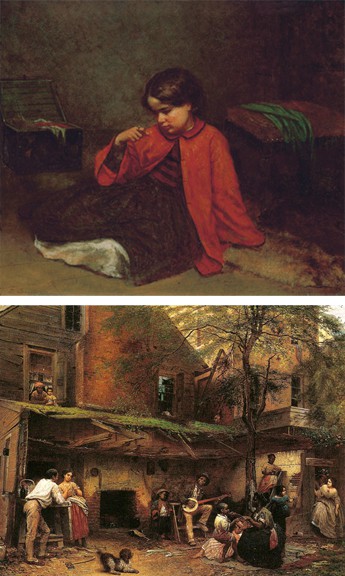